When you get tired of the monotony of everyday life, the idea of a break from the routine in the lap of nature feels like a sheer bliss. Something similar happened to me and I felt like escaping from the hustle bustle of the city life. As it was not easy for me to take more than a few days off from work, I was looking for an ‘offbeat’ weekend trip. So I googled it and got in touch with a group that was going for a trip to a countryside farm in Ropar (also called Roopnagar) to celebrate the colourful harvest festival of Baisakhi in Punjab. I too joined in and the journey began.

We all reached the beautiful Prakriti farm nestled in the foothills of Shivaliks late afternoon. I couldn’t have imagined that such a peaceful place existed close to my hometown Patiala and I was totally oblivious to it. We all received a warm welcome and hospitality from the Kaushal family, the owners of the farm. The popular chilled lassi was served with snacks and we were free to have a feel of the place. The pleasantness of weather during April, when it is usually hot in Punjab, was an unexpected but welcomed surprise. After the snacks, our tour of the farm began. The farm was spread over many acres of land and the Shivaliks surrounding the farm gave it a heavenly feel. Nature literally reigned supreme in the farm. There was a cottage perched high on a hillock which wad made up of mud and thatch roof to give the inhabitant the feeling of living close to the nature. Some part of land on another hill had been flattened and work was in progress to construct a place for meditation. Kinnu orchards, small farms of vegetables and some domestic animals lent it a feel of a real village. I felt nostalgic and drifted into a reverie of my childhood summer vacations at my grandparent’s village.

Sun was about to set and birds were retiring for the night. We hopped on a hill to pay a visit to the resplendent setting sun and capture its beauty in our cameras and minds. Then we stepped down and went to our respective tents which were simple and modest yet so comfortable. At night, a special program was arranged for us. The local artists were invited for a beautiful musical night. We all enjoyed and basked in the warmth of music and some fire that was needed as the weather changed from pleasantly cool to a little chilling. We relished our dinner with the folk tales in the form of traditional Punjabi songs. One of our fellow lady, who is blessed with a melodious voice, sang a song for us. This way our first night at the farm came to an end.

A visit to a nearby Gurudwara, Anandpur Sahib and Tibbi Sahib was planned for the morning. We all left in the morning after breakfast of lip smacking aaloo paranthas with butter. It took around an hour for us to reach the holy place where we paid homage to the God and had Langar (community meal) of Kadhi chawal (curry and rice) at Tibbi Sahib Gurudwara. We were enjoying our journey in the bus with a cool weather and drizzle outside. It was evening when we returned back to the farm and it was still raining. We were afraid that the harsh weather condition could mar the zestful Bhangra performance and bonfire that was scheduled next at the night. And again, thanks to the almighty, we had a clear sky soon. All were gathered at the venue, music was on, Bhangra had started and i could smell the barbecue snacks being cooked along with the heavenly fragrance of just wet earth. We all enjoyed the music, dance and of course the delicious meal with the drinks. The stamina and zeal of the dancers was mesmerizing which held our eyes for almost two hours. Being a Punjabi, I couldn’t help but shake a leg with them 😉 We all had a gala time and chatted till late night even when the party was over. But as all good things come to an end, this night ended too.

Next morning I woke up early to have a look at the rising sun but luck didn’t favour me and it was a little cloudy for a clear view of the sun. I had to settle for a morning stroll in the farm which was quite refreshing. I could feel the cool breeze on my face, I could smell the fresh morning air, hear the chirruping birds, feel the cool wetness of dewy grass under my bare feet and see the rising sun at last. Ahh, I didn’t realize that so many of my senses were working together at the same time. I felt really totally Alive! The whole experience was so surreal, basking in the soft light of the dawn in a tranquil ambience.

Now was the time for some adventure and we got ready to leave for our small trek to a cave around a kilometer away from the farm. Sadly the old lady who used to live and meditate there had passed away and we could just click the pictures of the cave and a temple on a nearby hill. After returning from the trek we had a dip in the farm tube well which was really soothing and rejuvenating after the tiring walk in the hot day. We had our brunch and started packing our bags for the return journey. Had tete-a-tete with the fellow travellers and bid adieu to our wonderful hosts and the Prakriti Farm. And I returned home with some marvelous experiences, happy memories, new friends and above all- “ A passion to travel discovered”  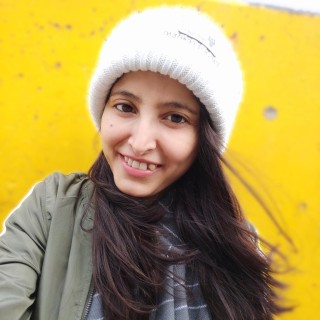 I want to experience life as much as I can. I love to read, travel, write, explore and learn new things. I strongly believe in 'Don't live doing the same thing every year and call it a life'.

"We live in the world when we love it." ~Tagore

A daily selection of the best content published on WordPress, collected for you by humans who love to read.

FERNWEH (n.) an ache for distant places; the incessant craving for travel.

musings by the window

A Travel Blog for Adventurous Females

The Art and Craft of Blogging

By You. For You. About You.

Travel writing and long form non-fiction narrative from the road

Tryst with my life